Yet 53% of visits are abandoned if a mobile site takes longer than three seconds to load.  That’s a big problem.

It’s no secret that shoppers expect a fast mobile experience. If there’s too much friction, they’ll abandon their cart and move on. Today, it’s critical that marketers design fast web experiences across all industry sectors. Consumers want to quickly pay bills on finance sites, get rapid results when they’re browsing vacation reviews, and view an article immediately when they click through.

Despite the fact that more than half of overall web traffic comes from mobile, our data shows that mobile conversion rates are lower than desktop.  In short, mobile page speed equals revenue.

Why mobile page speed is a visual designer’s problem

In an effort to get a better sense of how Google’s advertising partners are doing, we did an analysis of 900,000 mobile ads’ landing pages spanning 126 countries. That new analysis confirmed our thesis: The majority of mobile sites are slow and bloated with too many elements.

We dug deep into a wide range of sectors, from finance to travel. Pages from the automotive, retail, and technology sectors, on average, take the longest to load. And they also have some of the most bloated pages on the web.

Recently, we trained a deep neural network—a computer system modeled on the human brain and nervous system—with a large set of bounce rate and conversions data. The neural net, which had a 90% prediction accuracy, found that as page load time goes from one second to seven seconds, the probability of a mobile site visitor bouncing increases 113%. Similarly, as the number of elements—text, titles, images—on a page goes from 400 to 6,000, the probability of conversion drops 95%. 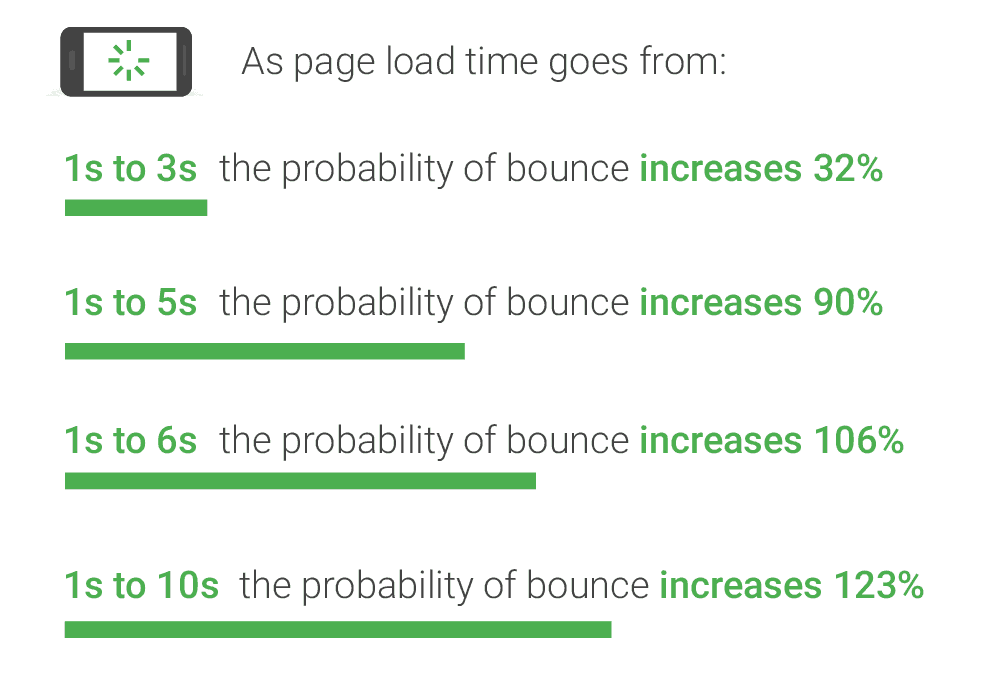 No matter what, faster is better and less is more.

And sometimes, leaner is better too. We found that 70% of pages were over 1MB, 36% over 2MB and 12% over 4MB. That’s enormous for a single mobile page, given that 1.49MB takes seven seconds to load using a fast 3G connection.  One image in particular caught our attention: It weighed a whopping 16MB.

But despite the bad news, there’s plenty of low-hanging fruit. Simply compressing images and text can be a game changer—30% of pages could save more than 250KB that way. Our analysis shows that the automotive, technology, and business and industrial market sectors have the most room for improvement.

When it comes to mobile pages, speed and size matter. Marketers must keep consumers engaged on mobile and focus on building mobile-first experiences. You can see how your current site scores on mobile friendliness and mobile page speed at Test My Site. Then, check out the charts below for a global perspective across industry sectors, including guidelines for speed, web page size, and the number of content pieces per page.